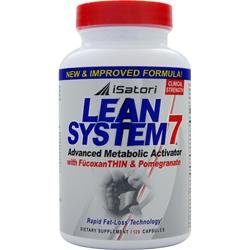 In this Lean System 7 review we’re going to look at a weight loss supplement that may actually work! So what is it and what does it do?

Lean System 7 is a supplement manufactured by a company called Isatori and is marketed as a fat burner.

Now if you’ve read any of our reviews on weight loss supplements, slimming pills, fat burners and the like you’ll appreciate that we’re…well, a little sceptical about the claims made by manufacturers for their products.

Usually with good reason as there’s often little if any hard, independent, clinical research evidence available to substantiate the claims.

So what is it about Lean System 7 that makes it any different from every other weight loss pill out there?

Lean System 7 contains as the name would suggest, a blend of seven active ingredients that the manufacturers claim account for its effectiveness.

Whatsmore, it’s never contained ephedra and as such is a very different product to the many now ephedra-free and as a result, largely ineffective products on the market.

Lean System 7 contains a number of the usual suspects such as green tea, yerba mate, guarana and citrus aurauntium. We’ve reviewed a number of these elsewhere in our healthy weight loss supplements section.

Without wishing to repeat ourselves, there’s little evidence to support the weight loss claims made for many of them, although green tea shows some promise.

However, the ingredient that really interests us in this Lean System 7 review is 7-Keto.

Or to give it its full name, 3-acetyl-7-oxodehydroepiandrosterone…we’ll stick with 7-Keto, shall we?

7-Keto is a naturally occuring metabolite of DHEA. But unlike DHEA, 7-Keto doesn’t convert into oestrogen or testosterone. An unwanted side-effect of DHEA.

Now there’s a lot more research to be done on 7-Keto, but the early signs are promising. 7-Keto does seem to offer benefits such as weight loss, fat reduction and a strengthened immune system.

Lean System 7 Review – How Does it Work…?

One of the problems when you’re losing weight is that the more weight you lose, the more your metabolism drops. This is known as the starvation response.

Your body equates dieting and weight loss with starvation and it drops your metabolic rate to conserve energy.

Subsequently, whilst you may manage a steady weight loss when you start a weight loss program, the longer you keep trying to lose weight, the less effective the diet becomes. Basically because your body constantly resets your metabolic ‘set-point’ to protect its fat stores.

Furthermore, once you’ve lost weight, your body will try to get back to its original set-point. In other words, you’ll tend to quickly regain the weight you’ve lost.

Now what the available research on 7-Keto indicates is that it stimulates the metabolism by increasing the thermogenic activity of enzymes in the liver. The net effect being an increase in your metabolic set-point and greater weight loss.

Now we could go on about how 7-Keto works, but what’s the evidence that it does work?

Lean System 7 Review – Does it Work…?

A study published in Current Therapeutic Research carried out by independent clinical researchers, evaluated the effect of 7-Keto on weight loss in two groups of 15 healthy adults.

The two groups had an average age of 44.5 and were given 7-Keto or a placebo.

Both groups were on 1,800 calories a day diets and exercised three times a week.

To cut a long story short, at eight weeks the group taking the 7-Keto lost a statistically significant 200% more body fat on average than the placebo group with no reported side-effects.

There are other studies that have shown similar results.

A cautious ‘so far, so good’ for 7-Keto, but what about Lean System 7?

In a study we found on PubMed, researchers in Minnesota carried out their own Lean System 7 review and evaluated its effect on metabolic rate and weight loss.

In a randomised, double-blind, placebo controlled trial, participants on a calorie restricted diet and exercise program were given Lean System 7 or a placebo.

At eight weeks, the group taking Lean System 7 had a statistically significant increase in their metabolic rates of 7.2% compared to a 0.7% decrease in the placebo group.

There was also a statistically significant reduction in waist circumference of 3.78cm in the group taking Lean System 7 compared to the placebo group who experienced a decrease of 2.07cm.

Again, the product was well tolerated with no adverse side effects.

Granted, these are a limited number of trials and we would want to see a lot more hard evidence before coming to any concrete conclusions.

However, this is one of very few commercial weight loss products with any independent, statistically significant evidence to back it up.

As such, we give it a cautious thumbs up.

However, don’t go getting the idea that all you’ve got to do is take a few Lean System 7 pills and the fat will melt away, because it won’t.

Lean System 7 will only work if used as part of a calorie controlled diet and exercise program. If used in this way, the available evidence would suggest that it may help you to shift those extra few pounds.

As long as you watch your calorie intake and keep exercising, it may also help you to keep them off in the longer term too.

Our Lean System 7 review verdict? The research evidence to date looks promising. You may want to give it a try as part of your diet and exercise program and see if it works for you.