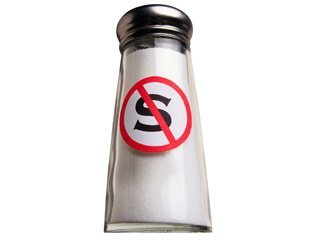 Our Low Sodium Diet Plan Review was prompted by my father in law who has high blood pressure, wants to lose some weight and improve his general health.

Dietary sodium is a major cause of high blood pressure and around 1 in 4 people in the US, UK and Europe suffer from the condition.

High blood pressure is a major heart disease and stroke risk factor, so losing some weight and reducing your daily sodium intake would make some sense!

So, if you have high blood pressure and want to cut back on salt, what’s the best way to do it?

Low Sodium Diet Plan Review – How Does it Work…?

The technical name for salt is sodium chloride and ordinary table salt contains around 40% sodium.

Reducing your salt intake is not as easy as it sounds. Did you know that the average person in the West gets 75% of their salt intake from processed foods?

So even if you want to cut back, it takes some thought and planning.

Food manufacturers are coming under increasing pressure to reduce the amount of salt they put in their food. But given that it’s a cheap way to add bulk and taste to food, they’re somewhat reluctant to comply.

Just check out the labels on pre-packaged and processed foods. A small 220g tin of baked beans contains nearly 3g of salt!

It’s no surprise then that the average person eats 2.5 times more salt than they should.

Now you do need to eat salt each day as the sodium part helps to keep body fluids at the right concentration. However, eat too much and the volume of body fluids increase, which pushes up your blood pressure.

There are many ways to cut back on salt, the two simplest ways being to cut back on or avoid processed foods and to reduce the amount of salt added to meals during cooking or at the table.

There are plenty of other ways to add taste to food, such as using herbs, spices, garlic, chilis or lemon juice.

Some condiments are also alarmingly high in salt. Soy sauce for instance, as well as anchovy paste, Thai fish sauce and many spice mixtures that can be used to sprinkle on meat and vegetables prior to cooking.

Low sodium diets – unsurprisingly! – are designed to cut back on foods with added salt and those which are naturally high in salt.

If you stick to fresh ingredients and cut out processed foods it’s not actually that hard to do.

Guess what? Follow a healthy balanced diet free from processed foods and you’re 90% there!

You won’t lose weight simply by eating a low sodium diet. You still need to eat fewer calories than you’re burning and build some exercise into your daily routine – basically, follow a healthy weight loss plan.

However, our Low Sodium Diet Plan review would suggest that by reducing your sodium intake and losing some weight you will reduce your blood pressure and risk of heart disease and stroke.

If you’re looking for a low sodium diet to help you to lose weight there are plenty to choose from.

A good example is the Low Sodium Plan from eDiets.com

. This plan will limit your sodium intake to a max of 2,400mgs a day and provides a range of healthy recipes and menus that will ensure that you’ll still be eating food with plenty of flavor.

In fact, one of the reasons people find it so hard to reduce their sodium intake and stick to a low sodium plan is because they don’t think they can do without salt.

The Low Sodium Plan menus use a range of herbs, spices and fresh ingredients to ensure that you won’t miss it!

Whatsmore, you can expect to lose a healthy 1-2lbs a week, which adds up to over 52lbs in a year!

Now that will really help your blood pressure…

Our Low Sodium Diet Plan review would conclude that reducing your sodium intake is a good idea for most people and potentially life saving for people with high blood pressure.

Following a low sodium diet and trying to lose weight can be difficult. You may want to eliminate the guesswork and try a plan like eDiets to ensure you get the…Low Sodium Diet – Facts

Our Low Sodium Diet Plan review? Could be a life-saver!