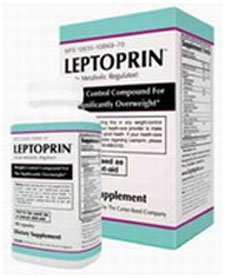 We couldn’t resist a Leptoprin review as Leptoprin (Anorex) SF is one of the most expensive weight loss supplements we’ve come across – so does it work?

At a whopping $130-$160+ for a 30 day supply, depending on where you buy it from, Leptoprin is significantly more expensive than many similar products. So how does its manufacturer justify such a hefty price tag?

Leptoprin Review – What’s in it?

The original Leptoprin, also marketed as Anorex was a popular ephedra-based supplement and contained the quite effective ECA (ephedra, caffeine, aspirin) stack.

After ephedra was banned in the US, Leptoprin was reformulated and relaunched as Leptoprin SF. The SF stands for ‘stimulant free’.

Neither company is a pharmaceutical company although they sound like they are. They actually market herbal supplements.

Interestingly, both companies appear to be marketing arms for another company called Basic Research, based in Utah. More on that later.

Leptoprin has been very slickly marketed via TV infomercials and other media and makes some pretty incredible claims to justify its price tag.

It’s marketed as, “The first stimulant-free weight control compound for the significantly overweight…more than 20lbs overweight or a body mass index (BMI) greater than 27.”

Before we go any further, what’s in it?

Hey-ho, looks very similar to all the other weight loss supplements that have had their ephedrine taken away!

We’ve already written about these ingredients and their potential to support weight loss. Check them out elsewhere in our section on healthy weight loss supplements.

Some of them, green tea in particular do show some promise as aids to weight loss. Leptoprin SF uses them in a trademarked proprietary blend.

However, we don’t see much in there that other products don’t contain…and at a fraction of the price!

Leptoprin Review – Does it Work…?

There’s research quoted on the company website and in the blurb used to advertise the product on the various websites selling it.

You can read the claims made for the product yourself so we’re not going to repeat it in this Leptoprin review.

The clinical trial quoted to substantiate the claims made for the product is interesting. It’s been published in a journal called Current Therapeutic Research (April 1999, vol. 60, issue 4, p220-227).

In short, the clinical trial would seem to have failed to prove that the product was effective for weight loss.

Whilst Leptoprin may have been “designed” for use by the significantly overweight, it would appear on the basis of the available evidence thatthey won’t lose much weight taking it.

No mention of any of that in the marketing and advertising blurb.

Granted, the trial was carried out on the original product, which contained ECA and not the SF formulation. But it’s likely that it was the ECA stack that conferred any weight loss benefit in the vast majority of weight loss supplements, fat burners and the like in the first place!

However, we’ve not been able to find any subsequent evidence in this Leptoprin review to support the claims made by the manufacturer for Leptoprin SF.

It would also seem that the FTC (Federal Trade Commission) in the US has also had problems with the claims made by the manufacturer for Leptoprin.

They concluded that the “Companies do not have adequate substantiation to support the claims made” and charged amongst others, Basic Research, AG Waterhouse and Klein Becker of “making numerous false and unsubstantiated claims for weight loss…supplements”.

You can read the full FTC transcript here.

In conclusion, we’d agree that there are some worthwhile ingredients in Leptoprin. The problem we have is with the price…and the outrageous claims of course!