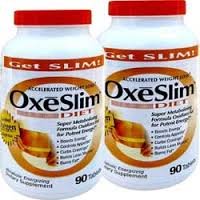 The OxeSlim Diet reviews well as a convenient meal replacement program – convenient as long as you accept that you’ll be drinking low calorie shakes to replace a meal or two for the next few months.

The OxeSlim Diet System is a meal replacement program that comes with the usual claims made for products of this type, that they’re scientifically designed and shown to lose weight.

The slogan on the pack reads, “Weight loss is just a shake a day away”, which pretty much sums up this diet – one shake and two meals a day.

There are also some weight loss tablets you can add to the diet if you choose to.

So, is this diet any good?

Ok, let’s start with the advertising hype as there are all sorts of claims made in the promotional literature.

“Utilizes a scientifically proven naturally occurring action mechanism that will help you lose weight, fat, pounds and inches, while also controlling cravings and providing you with key nutrients to build muscle and boost energy without stimulants to get you the body you’ve always wanted!”

Really? All from that little can? Well, perhaps that’s not fair as the diet is about more than just a shake and a pill a day. There’s some sound and familiar weight loss advice on the website and accompanying literature.

All well and good, but having reviewed the evidence to support these claims – there are three references cited on the website, I’m not sure how conclusive that evidence is in terms of substantiating the claims made and I’d like to see some further scientific evidence before making my mind up.

So what do you have to do to secure these miraculous benefits?

Pretty simple really. You buy a pack of shakes, which work out at around $2 a pop, which is quite reasonable compared to the cost of a sandwich or other fast food. Mix it with water and drink it in the place of a “high calorie meal”.

Each shake comes in at 160 calories and you can replace up to two meals a day.

There are 14g of protein in each shake and virtually no fat.

There’s 29g of carbs in total. However, most of the carbs are in the form of fiber, or “low net impact carbs”.

Basically, that means that as your body can’t digest fiber, it passes through your system without releasing much energy. It’s a low calorie way to bulk up the shake.

There’s also 12.5g of Provon 292 protein powder, not sure what that is from the packaging alone, and an amino acid complex.

They contain a proprietary blend of:

So there you have it, drink one to two shakes a day, eat one to two meals and take a supplement.

OxeSlim Diet Reviews – Does it Work…?

First off, you’re going to be on a low calorie diet so sure, you should lose some weight.

The product literature claims you’ll lose up to two inches in two weeks, although its not clear from where, exactly.

However, two inches spread over your whole body is not a lot to shout about.

On the other hand, any inch loss is welcome, although in the short term much of this is likely to be water.

Despite the claims that the diet uses a proven “action mechanism” to help you lose weight, we can’t find any scientific studies to prove that the OxeSlim Diet System works.

We’ve asked the company to provide some evidence derived from independent, randomised, double blind, placebo trials (the gold standard) carried out on people using the OxeSlim diet, which we’ll be happy to post when we get them.

As for the other claims made, well shall we just say that the OxeSlim Diet reviews well as a promotional exercise!

As for the tablets, they cost around $35 for 90 and you take four tablets a day, which could work out to be expensive depending on your income and how long you intend to take them.

There’s also little if any evidence that the ingredients they contain will have much effect on your body composition.

Furthermore, we could find no compelling, independent scientific evidence to demonstrate their effectiveness for fat loss and muscle growth.

Let’s see what the company comes back with.

Eat a few sensible meals and drink a shake or two a day and sure, you’ll lose weight at first. And there are certainly far worse ways to shed a few pounds!

$2 a shake isn’t particularly pricy if you’re drinking one a day, although the tablets add to the cost of the diet.

Given the absence of any hard evidence that they work, we’d be tempted to skip them and take a multivitamin instead.

The OxeSlim Diet reviews well for convenience and like other similar programs should result in some weight loss, but may not be a long term solution to your weight loss dilemmas.

Shake based diets can prove boring, although one shake a day and two regular meals shouldn’t prove too difficult to stick to.

The 160 calories a shake is a little low as a meal replacement, however, and you’re likely to feel hungry, despite the claims to the contrary.

The diet is not too structured so will suit those who want a non-prescriptive approach, but not those that like a more formal diet with meal plans and support.

Our OxeSlim Diet reviews verdict? Shake based diets work for some people, but the jury’s out on the diet pills.

If you’re looking for a flexible, formal diet with meal plans and 24/7 support why not get a free profile at eDiets.com

Disclaimer: – All product reviews on this website are based on the personal opinions of the reviewers, are not scientific fact, do not constitute medical advice and are intended to aid consumers in making an informed choice. Readers should do their own due diligence if they are considering buying or using this or any other product.