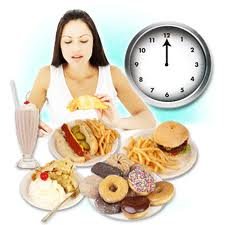 A strategy to stop binge eating is crucial for many people who need help to lose weight and keep it off.

Binge eating is a psychological condition that millions of people experience.

Binge eating is a term used to describe people who use food as a response to emotional situations rather than hunger.

People who frequently overeat as a response to a loss of control in various areas of their lives.

For most people it’s a relatively low level preoccupation with food that leads to their overating. For others it can be far more serious.

Binge eating is often related to self-esteem and self-image.

Many binge eaters feel uncomfortable and preoccupied with their bodies. Either one aspect or the whole package and find it difficult to stop binge eating.

Sometimes, bingers are not particularly overweight. They just don’t like their bodies very much. They don’t like who they are and binge eating is a way of dealing with it.

Often bingers binge eat to punish themselves for what they look like and for who they are.

Ironically, it’s claimed by many people who work with people who binge eat that if diets didn’t exist, there would be no such thing as binge eating.

Not sure if we’d go that far, but if people didn’t feel the pressure to diet they may well find it easier to stop binge eating.

If there wasn’t the pressure to conform to a media-inspired ‘perfect body’ they may be able to stop binge eating.

How Widespread is Binge Eating?

But let’s make a distinction between being greedy and overeating regularly and suffering from a binge eating disorder.In our experience, it’s quite common.

Just as many people seem to have miraculously developed allergies to everything from house dust to hoovers, so binge eating disorder can be used as a fashionable label – excuse – for anyone who overeats.

Estimates vary as to how prevalent binge eating disorder is, with estimates in the US putting it at around 2% of the population.

In our experience, we’d say that of the people we’ve worked with, around 1 in 10 have something approaching a genuine disorder, with many more binging on a regular basis.

This would seem to accord with figures from many commercial weight loss programs.

So what are the symptoms For us, the sure sign of a binge eater is someone who has yo-yo dieted frequently in the past 12 months or so. Also people who are ‘always on a diet’!

But it’s more complicated than that.

It’s normally a slow process. Sometimes in response to a stressful life event. Sometimes as a seemingly natural and remoreseless progression from teenage puppy fat.Most binge eaters are aware that their weight is on the increase. Most bingers became overweight at an early age and despite frequent bouts of dieting have gradually put on the weight over several years.

One of our clients put on 140 lbs over 15 years following a divorce. Despite trying to diet once or twice a year the weight kept piling on. Chocolate, crisps, she binged on pretty much anything in the house.

Another client was an overweight teenager and grew into an obese adult. The pattern of overeating was established early in life and reinforced by frequent bouts of bullying.

What often typifies binge eaters is self denial.

It’s easy to dismiss and refuse to admit that binging and weight gain is a problem when it creeps up on you gradually.

Many of our clients refused to admit they were bingers and as a result struggled to stick to a weight loss plan.

Those that quit often blamed their hormones and big bones, rather than their binging!

If you want to lose weight you’ve got to recognise and stop binge eating.

One client was fond of saying, “no problem, it was only a bar of chocolate, I’ll get back on track tomorrow.”

There was always another bar of chocolate…and another…and another. Tomorrow never came.

Face up to it and realise that you’ve got to stop binge eating, or you’ll never lose the weight.

So what are the causes of binge eating? In no particular order of importance:

Take your pick. The causes are unclear and often personal to that individual.

Depression is also cited as a cause, as many binge eaters have a history of depression and mental illness. However, whether that’s a cause of their binge eating or a result is difficult to determine.

How Do You Stop Binge Eating…?

What does that tell you?

If you binge eat and want to lose the weight you need to focus on the binge eating if you’re going to lose weight.

Often, once the binging is addressed the weight loss will follow. Stop binge eating and lose weight.

Simplistic we know, but a bit of a no brainer really.

Now, people with a serious binge eating disorder may benefit from professional help and treatments such as these :

However, many people with a lower level disorder find that they can overcome their binge eating once they recognise they have a problem.

Here are some strategies that people we’ve worked with have tried with some success to stop binge eating.

You may also want to give our seven simple tips on how to control binge eating a try.

Remember, to stop binge eating, recognise that you have a problem, commit to doing something about it and realise that you’re not alone.

Previous Chitosan For Weight Loss
Next How to Control Binge Eating